From my weather.com stalking the week preceding the marathon, I knew there was no hope for sunny skies or even dry weather. Looking out the hotel door after the 5:30am alarm, it wasn’t raining but sure enough, the clouds looked heavy. I had 2 pieces of toast with peanut butter, a banana and a cup of coffee while getting dressed. R was also putting on his running clothes so he could run while waiting to catch me at his planned locations. We were in the car for the 30 minute drive to the start at 6:30. We parked a short walk away from the start and followed the rest of the runners to the staging area. It was certainly a difference from my past marathons – people milled about with their fans and dogs, coming in and out of the school gymnasium and the corral area was tiny! I had to find pins for my number, then R and I walked over to check out the starting line. We met a local man who outlined the course for me in great detail. By now, the rain had started coming down steadily; luckily we found a tent to stay dry (and BodyGlide up). 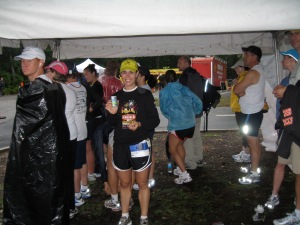 About 20 minutes before the gun, R started walking to his vantage point about a half mile from the corral. Here, he could see me right away, then again at 22 miles and 25 miles. I stopped sipping water, lost the long-sleeved shirt, and ventured out into the rain. By now the crowd was growing and I noticed pacers had come out; I joined the group huddling around the 3:40 pacer in hopes of using him for the first few miles to prevent myself from going out too fast. For a small group – 300 marathoners and ~1000 half-marathoners – the excitement was strong and people were smiling despite the rainy start.

At mile 15 I reassessed how I was feeling. My pace felt effortless, my breathing wasn’t too labored, and my legs had continued to feel strong. The past 11 miles had been just what I wanted and I was still enjoying a runner’s high. I wanted to keep this going as long as possible! At mile 17 I inwardly celebrated the entrance into single-digit-to-go territory and began comparing my distance remaining with runs I did throughout training almost weekly. They were handing out Gus at Mile 17; I took one but held onto it until Mile 19. (16-8:17.98; 17-8:33.66; 18-8:27.75; 19-8:33.83). Around mile 17 I also noticed I was steadily passing people – the few there were as by this point we were all very spread out.

At the 20-mile mark – 10K to go! – I reassessed again. And to my surprise I felt… great! My legs were tightening up but there was no hint of a wall yet. And I was still passing people. At this point we were back in the woods, on back country roads, which was slightly disconcerting as you could not see anyone and the tired brain would wonder if it missed a turn. As my legs were getting tired, I once again played with my stride a bit and used the rolling hills to my advantage to use different muscles. I was shocked to look at my watch at the 21 mile mark to see a 7:52. I had a momentary thought of slowing down back to pace, but then I thought, if I feel this great at a faster pace, why not just go with it – the last 5 miles are going to hurt, anyway. (20-8:21.16; 21-7:52.56)

At this point, the countdown really began and the mental tricks to get me through each mile started. Mile 21 – 5 miles, that’s about the Reservoir loop that I’ve run so many times during my taper. At Mile 22 I’ll see R and then it’s just 4 miles which is the shortest loop in my repertoire. The torrential rain at this point feels good, nevermind the 5 extra pounds of water I’m carrying in my shoes.

R is there to prop me up as I remove my chip and shuffle away from the finish. We walk around, grinning at each other, I think R is more excited than me (or has more energy to show it) and then head to the car to change into dry clothes. There is food and drink and dry stretching space in the gymnasium. 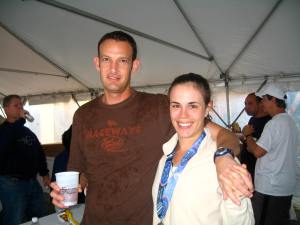 I was so impressed with the organization, volunteers, and small but enthusiastic crowds at this race. The only drawback would be if you don’t like running without crowds and entertainment – but if you can deal with being alone and not needing the crowds for motivation, then it’s a nonissue. For this race and what I wanted to accomplish, it was actually a benefit – I was able to concentrate on MY race and not get sucked into anything other runners were doing. Thanks, Hamptons!

**This just in: Brightroom Photos!**

Writer, author, curator of The Bank of Erin View all posts by Erin M. Bank

Subscribe to my monthly newsletter – exclusively for email followers!