For the past three weeks, I have been traveling in South Africa and Namibia with my mom. We went seeking giraffes and (for me, anyway) a reset and break from a busy year. We came back with thousands of animal pictures as well as a greater sense of the often bleak and violent history of the region. Touching upon the hundreds of years of European settlers, displacement of indigenous tribes, wars, genocides, apartheid, and current politics is certainly beyond the scope of a single blog post, but there’s a lot bouncing around my head, and it was the kind of eye-opening learning that only comes by traveling and witnessing first-hand the spectrum of human history in a place.

Of course, it was instinctual to compare a lot of what took place in South Africa and Namibia to what’s gone on in American history. Although the US didn’t have an apartheid government, it’s certainly done its fair share of segregation and been perhaps more sneaky about putting policies into place to disproportionately affect minority groups. What makes the US different and I’d argue more broad in its ability to create conflict is this: while it’s easy to compare how South Africa treats blacks to how the US treats blacks, this is actually a bit of a false comparison. Black tribes were the indigenous population of Africa when European settlers arrived. A more apt comparison would be the displacement of American Indians by European settlers and the subsequent mistreatment of this entire population.

So, ok, we’re academically comparing those two crises in what is probably a topic for any intro to history course. But America also brought people to its shores in chains as slaves and then continued to treat this population as second-class (or worse) citizens even until now. Add that layer to our sins. And a layer to that, for rounding up Japanese citizens and throwing them in internment camps during WWII. Rounding up whatever group of immigrants was the mode of the day and subjugating them to tenements and slums, from the Lower East Side of Manhattan to Chinatown in any city.

America has been separating people by race and ethnicity since day one.

Swakopmund, Namibia is a small coastal town of 45,000 people, originally founded by German settlers and maintains a European flavor in its architecture and city layout to this day. It’s a tourist hub at the place where the ocean meets the desert and dotted with coffee shops and upscale gift shops. Not more than a five-minute drive from downtown is the “suburb” of Mondesa. Wikipedia’s description is aggravatingly simple: “Originally Mondesa was a township for the Black people of Swakopmund. It is still today the poorest part of town, characterized by small individual houses and a population with high unemployment. It is also the fastest-growing district with an ever-growing population.”

Mondesa is not just a poor part of town. It is where the slums are. The shantytown, to use a term no one wants to use anymore. We drove by small houses constructed by the government when they moved blacks there during apartheid (more on this later). We drove by houses being built now to increase the number of dwellings. We drove by blocks and blocks of structures made out of cardboard boxes and scrap metal and wood pallets. Communal bathrooms and water sources. Bare feet and squalor. 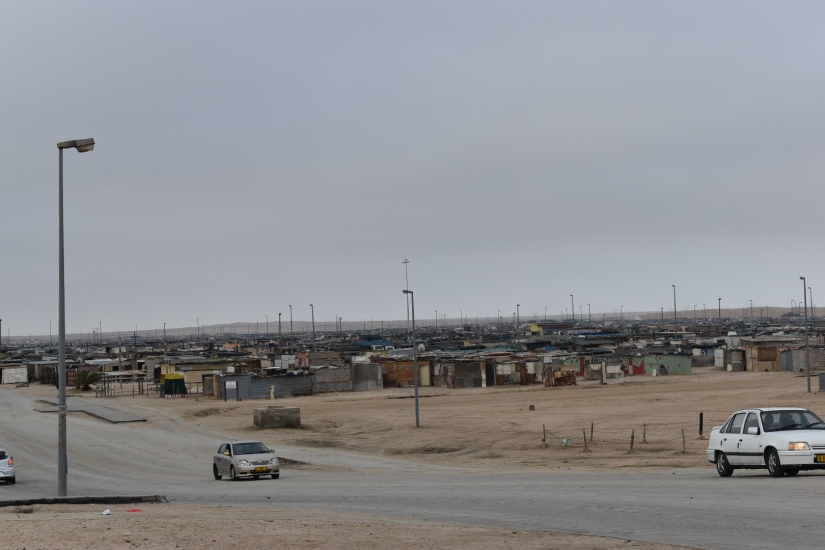 I could spend a lot of time writing about what we saw. But today, I want to share a single fact that encapsulates for me what went on during apartheid and, on a different scale (at least for now) casts a lot of what’s going on in the US in a different light.

As we drove through Mondesa, our tour guide pointed out different neighborhoods that had originally been given to the different indigenous tribes. Over here were tiny one-room homes, over there more generous two-bedrooms, and on the other side of town huge four-bedroom homes.

Why were they all different, we asked.

So they would spend time fighting amongst each other and not unite against the government.

The answer was given as simply as when we asked about why a certain animal behaved the way it did or how a rock structure came to be where it was. Matter-of-factly. A part of history. A fact.

Not completely devoid of emotion, but just naming this as fact uncovers the truth and makes it possible (although it’s hard to see when you’re surrounded by shacks) to address the issue and move on.

Now that there is a democratic government and apartheid is no longer the law of the land, anyone can live anywhere (though of course now it’s dictated by money). Shockingly, despite the forced in-fighting, the various black tribes now get along very well. There is pride and language and custom unique to each, but tensions aren’t incredibly high between tribes.

The people in power in the US have been putting us into different houses all along. I’m not suggesting some conspiracy theory of who and how and what, but I am suggesting that we all need to take the wool from over our eyes. Division helps the powerful stay in power. By identifying another group that is to blame for what we’re unhappy about, we focus on in-fighting rather than uniting against the greater forces at play. Again, this is beyond any single individual but a societal force that is easy to take advantage of by the right mix of ego and power.

For me, I’ve been spending a lot of time thinking and writing about why we as a population got to where we are, with such divide and fear and anger. Are we lacking empathy, are we too concerned with the individual over the group, are there fundamental differences between “us” and “them” that prevent us from crossing the divide?

I now am thinking that, although my motivation is to seek solutions, it is also fits directly into creating false dichotomies between people who think like me and people who don’t.

And what if the selection of which house people go into is pretty much completely arbitrary, except of course giving the best houses to those who look like the people in power (in the US, rich white men)? That is has nothing to do with deserving or value or political party but with creating enough discord that we lose focus?

The former makes me feel better in the short term, as it satisfies a need to explain, to know why, to know “what happened.”

The latter is much more difficult. We’ve been trained to see differences. It’s human nature, besides. But I’m curious to try this new lens. Even if that means admitting that I’ve been duped. We all have. Let’s find solidarity in that.

Writer, author, curator of The Bank of Erin View all posts by Erin M. Bank

Subscribe to my monthly newsletter – exclusively for email followers!